Signs of Abuse and Unhealthy Relationships

Domestic abuse can happen to anyone, yet the problem is often overlooked, excused, or denied. This is especially true when the abuse is psychological, rather than physical. Emotional abuse is often minimized, yet it can leave deep and lasting scars.

Noticing and acknowledging the warning signs and symptoms of domestic abuse is the first step to ending it. No one should live in fear of the person they love. If you recognize yourself or someone you know in the following warning signs and descriptions of abuse, don’t hesitate to reach out. There is help available.

Domestic abuse, occurs when one person in an intimate relationship or marriage tries to dominate and control the other person.

Domestic abuse is used for one purpose and one purpose only: to gain and maintain total control over you. An abuser doesn’t “play fair.” Abusers use fear, guilt, shame, and intimidation to wear you down and keep you under their thumb. Your abuser may also threaten you, hurt you, or hurt those around you.

Domestic abuse does not discriminate. It happens among heterosexual couples and in same-sex partnerships. It occurs within all age ranges, ethnic backgrounds, and economic levels. The bottom line is that abusive behavior is never acceptable, whether it’s coming from a man, a woman, a teenager, or an older adult. You deserve to feel valued, respected, and safe.

Recognizing abuse is the first step to getting help

Domestic abuse often escalates from threats and verbal abuse to violence. And while physical injury may be the most obvious danger, the emotional and psychological consequences of domestic abuse are also severe. Emotionally abusive relationships can destroy your self-worth, lead to anxiety and depression, and make you feel helpless and alone. No one should have to endure this kind of pain— the first step to breaking free is recognizing that your situation is abusive. Once you acknowledge the abusive situation, then you can get the help you need.

Signs of an unhealthy relationship

To determine whether your relationship is unhealthy, answer the questions below. The more “yes” answers, the more likely it is that you’re in an unhealthy relationship.

When people talk about domestic abuse, they are often referring to the physical abuse of a spouse or intimate partner. Physical abuse is the use of physical force against someone in a way that injures or endangers that person. Physical assault is a crime, whether it occurs inside or outside of the family. The police have the power and authority to protect you from physical attack.

Sexual abuse is a form of physical abuse

Any situation in which you are forced to participate in unwanted, unsafe, or degrading sexual activity is sexual abuse. Forced sex, even by a spouse or intimate partner with whom you also have consensual sex, is an act of aggression and violence. Furthermore, people whose partners abuse them physically and sexually are at a higher risk of being seriously injured or killed.

Emotional abuse: It’s a bigger problem than you think

When people think of domestic abuse, they often picture battered women who have been physically assaulted. But not all unhealthy relationships involve violence. Just because you’re not battered and bruised doesn’t mean you’re not being abused. Many women suffer from emotional abuse, which is no less destructive. Unfortunately, emotional abuse is often minimized or overlooked—even by the person being abused.

The aim of emotional abuse is to chip away at your feelings of self-worth and independence. If you’re expereincing emotional abuse, you may feel that there is no way out of the relationship or that without your abusive partner you have nothing.

Emotional abuse includes verbal abuse such as yelling, name-calling, blaming, and shaming. Isolation, intimidation, and controlling behavior also fall under emotional abuse. Additionally, abusers who use emotional or psychological abuse often throw in threats of physical violence or other repercussions if you don’t do what they want.

Economic or financial abuse: A subtle form of emotional abuse

Remember, an abuser’s goal is to control you, and they will frequently use money to do so. Economic or financial abuse includes:

Violent and abusive behavior is the abuser’s choice

Despite what many people believe, domestic violence and abuse is not due to the abuser’s loss of control over their behavior. In fact, abusive behavior and violence is a deliberate choice made by the abuser in order to control you. 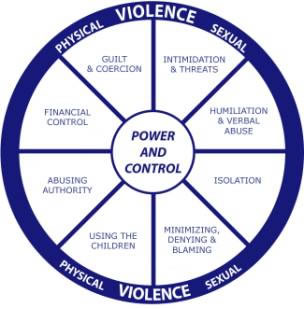 Abusers use a variety of tactics to manipulate you and exert their power:

Abusers are able to control their behavior—they do it all the time.

The cycle of abusers behaviour

Your abuser’s apologies and loving gestures in between the episodes of abuse can make it difficult to leave. He may make you believe that you are the only person who can help him, that things will be different this time, and that he truly loves you. However, the dangers of staying are very real.

Find out more or adjust your settings.

This website uses cookies so that we can provide you with the best user experience possible. Cookie information is stored in your browser and performs functions such as recognising you when you return to our website and helping our team to understand which sections of the website you find most interesting and useful.

You can adjust all of your cookie settings by navigating the tabs on the left hand side.

Strictly Necessary Cookie should be enabled at all times so that we can save your preferences for cookie settings.

If you disable this cookie, we will not be able to save your preferences. This means that every time you visit this website you will need to enable or disable cookies again.